When you book with an account, you will be able to track your payment status, track the confirmation and you can also rate the tour after you finished the tour.
Sign Up
1641

Do not hesitage to give us a call. We are an expert team and we are happy to talk to you.

In addition to the Nava Dwaraka temples, you will also get to visit the famous Somnath Temple.

Gomti Dwaraka: Also called Dwarkadhish Temple, this is the main temple of Lord Krishna that stands on the banks of Gomti river. There is also a small shrine for Gomti Devi. This temple is also a part of the most famous Char Dham Yatra. It is historically considered as the capital of Lord Krishna’s kingdom.

Samudra Narayan: Samudra Narayan Temple,one of the most loved Dwarka tourist placesis located at the Gomati Sangam Ghat just behind the Dwarkadhish Temple. The temple is dedicated to Goddess Gomti and as per the legends; River Gomti was brought from heaven by Rishi Vasishtha to sanctify Lord Rama after the battle he fought with the demon king Ravana.

Bhet Dwaraka: ‘Bhet’ in the local language means ‘Island’. It is said that Lord Krishna ruled from here. There are several Sannidhis here. One of them is for Devaki, Krishna’s mother. There is a lounge and a couch on which Lord Krishna and his queens offered ‘Shodasa Upacharas’ to Kuchela. The island presents a wonderful scenery being surrounded on all sides by the waters of the Arabian Sea. It is believed that several more Dwarakas existed there but all of them had submerged under the Sea.

Sudhama Dwaraka: It was here that Sudhama lived. Sudhama (Kuchelan) and Sri Krishna were childhood friends and studied under the same guru, Sandipani. People call this place with various names such as Sudhama Dwaraka, Sudhamapuri and Kuchelapatnam.

Moola Dwaraka: This is the place where Lord Krishna is said to have set foot first on arriving at Dwaraka. But, he seems to have forsaken this place and moved to Bhet Dwaraka.

Mukti Dwaraka: This is the place where Lord Krishna was last seen. At this place there is a hall in which we find Krishna reclining on the branch of a tree with a foot dangling. A hunter who shot a poisonous arrow at his toe tip mistaking it to be the beak of a bird is found kneeling before the Lord begging his pardon. It is over here that Lord Krishna made a pretext to ascend to his Paramapadam. As this is the place where he was ‘last seen’, this place is called ‘Mukti Dwaraka’.

Dakor Dwaraka: This is a wonderful temple with intricate wood carvings and architectural beauty and the Lord stands in all his majesty. One is reminded of Guruvayurappan in Kerala. It is said that the original Dwarkadhish idol left Dwaraka out of his own free will to stay at his devotee’s place in Dakor.

Shrinathji Dwaraka: This temple is around 50 Km from Udaipur. ‘ Nathdwara ‘ means the gate of god. The image of Shrinathji is worth seeing and feeling the celestial beauty of the God. 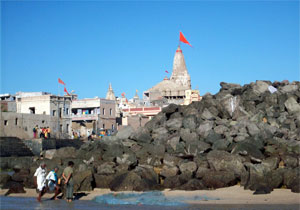 Dwarka : Dwarka is situated towards the western-most part of the Indian state of Gujarat. Located on the tip of the Saurashtra peninsula on the Arabian Sea, Dwarka was once referred to as the Golden City. Dwaraka has remarkable significance as per Hindu lore since the place is categorised under both the ‘Chardham’ sites and the ‘sapta-puris’ (seven sacred cities). The name ‘Dwarka’ that came from two words – dwara (door) and ka (Brahma) – stood for ‘gateway to the spiritual union with Brahma’. Dwarka is one of the ancient cities of India with a history that dates back to the 1500 BC and is linked to the ancient Hindu texts like the Gita and Puranas. Dwarka is associated with the life of Lord Krishna, who is believed to be one of the incarnations of Lord Vishnu. Nageshwar Mahadev, Rukmini Temple, Bhalka Tirth, Gomati Ghat Temples, etc. are popular pilgrim spots in Dwarka. 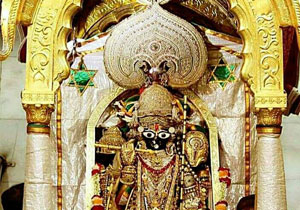 Dakor : Dakor is a city and a Nagarpalika in Kheda district in the state of Gujarat, India. It is prominent for its grand temple of Shree Krishna-Shree Ranchhodraiji. On full moon days, people visit the temple to seek the blessings as was done by the devotee who brought Shree Krishna to the temple. So there is a great inflow of people and the town is very crowded. There is a carnival or fair taking place around February and March, on the day of festival of Holi and observed by all Hindus as a mark for triumph of the truth and goodness. On the day of sarad purnima which comes after end of navratri is the day believed on which lord krishna come to dakor as ranchodrai with his great devotee known as bodana. lord come to dakor to fulfil the promise that he will come to dakor with bodana. 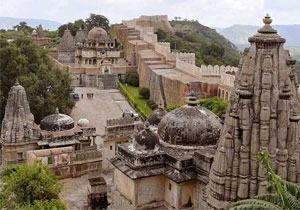 Nathdwara : Nathdwara is a town in Rajasthan state of western India. It is located in the Aravalli hills, on the banks of the Banas River in Rajsamand District, 48 kilometers north-east of Udaipur. This town is famous for its temple of Krishna which houses the idol of Shrinathji, a 14th century, 7-year old “infant incarnation of Krishna. The idol was originally worshipped at Mathura and was shifted in the 1672 from Govardhan hill, near Mathura along holy riverYamuna after being retained at Agra for almost six months, in order to protect it from anti-Hindu fanatic iconoclastic Islamic policies of Mughal rulerAurangzeb’s. Literally, Nathdwara means ‘Gateway to Shrinathji’. Nathdwara is a significant Vaishnavite shrine pertaining to the Pushti Marg or the Vallabh Sampradaya or the Shuddha Advaita founded by Vallabha Acharya, revered mainly by people of Gujarat and Rajasthan,among others. Vitthal Nathji, son of Vallabhacharya institutionalised the worship of Shrinathji at Nathdwara. Nathdwara town itself is popularly referred to as ‘Shrinathji’, after the presiding deity. 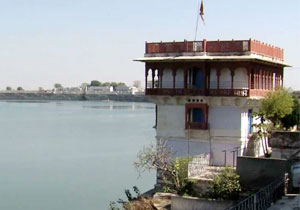 Kankroli : Kankroli is a small town, located at a distance of 65 kms from the city of Udaipur. Kankroli is mainly known for its temple, which is sited on the banks of renowned Rajsamand Lake. Kankroli Temple is popularly called as temple of Dwarikadhish. Dwarikadhish is one of the names of Lord Krishna. This Temple is the most significant temple of the Vaishnavas and Vallabhacharya sect. The chief deity of Kankroli temple is believed to have imported from Mathura, the hometown of Lord Krishna. Dwarikadhish Temple has a very quiet and soothing ambience. It really carries away all the tensions at once and bestows a heavenly bliss. In the complex of the Temple, there is a small garden where you can sit and enjoy the beauty of nature. You will also come across a library that possesses a huge compilation of old books. Kankroli Temple has also maintained a band group. Dwarkadheesh Temple offers a tranquil view of the cool and calm Rajsamand Lake. Every year, people in large numbers come to visit this temple from all over India. If you are visiting Udaipur, you must visit this temple of Dwarikadhish, to receive the blessings of Lord Dwarikadhish . 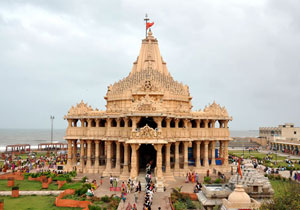 Somnath Temple: Somnath, literally means Lord of Moon, derived its name from the famous Somnath temple. This religious destination was earlier known as ‘Prabhas Patan’. This town, unaffected by the modern luxuries and concrete jungles, still holds its historical, mythological and religious appeal to masses of Hindu devotees. Somnath has got its mention in Puranas and Hindu Epics including Mahabharata. This place is considered as a place where Moon (Soma) worshipping the Lord Shiva and hence Shiva is called as Somnath here. Another Hindu mythological story mentions Somnath as the place where Lord Krishna was shot by an arrow in his foot. It is believed that the Yadavas, the descendents of Lord Krishna, fought among themselves and destroyed the Yadav community.

Arrival by train / flight .Depending upon time.Sightseeing of local Places Akshardham at Gandhinagar etc and Halt.

Morning . Dep .For Dwaraka and arrival at even.Darshan of Dwarkadish Temple.

Proceed to Somnath via porbandar and see Somnath temple and surrounding Places and halt Somnath.